One of my best friends in college had a bit of a flair for the dramatic, you might say. Well, you would definitely say that if you knew her.  And while she is beautiful, she did not always embody grace.  She often regaled us with stories, dramatizations complete with sound effects and staged choreography, so we could relive her moments with her.

One event in particular sticks with me from our freshman year. She was rollerblading and she fell and took a few layers of skin off her knees. (Well, that is the short version.) But if you were listening to, and watching and experiencing, her retelling, you might have thought the road had it out for her, that it was hiding behind some pavement in order to jump up at the last second to grab her wheels and knock her off balance. You might have thought that the shadows were conspiring against her with the dips in the road in order to seduce her rollerblades towards danger. You might have thought that her roller blades needed a vacation in the back of her mini dorm closet underneath winter sweaters and were trying to plot their own grounding. These dramatizations were often complete with the replaying of any and all sound effects or dialogue (or often monologue) from the event, as well as my friend throwing herself on the ground to display how she was almost maimed.

Tonight, while we were getting ready for bathtime, I hear Luke running up and down the hallway (usual pre-bathtime event in our house-Naked Running) and then I hear a crash. He is in front of me in an instant. After I ask him if he’s okay, he says, in his two-year old run on sentences, “I running, and running and I fell and I have booboo, I running.” And when I ask if he’s okay (obviously without the fanfare he desired) he repeats in a higher pitched voice, with repeated phrasing, “I running, running, running and I fell. I running 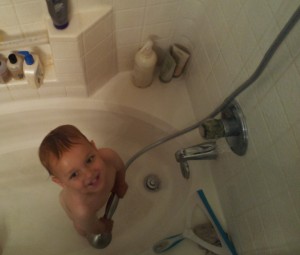 I'm a wife, mom and kindergarten teacher . A daughter and sister and granddaughter. A friend, a confidante...(I used to watch Golden Girls with my Nana all the time when I was little). And it's so nice to walk into a place where everyone knows your name (and I used to pretend I was sleeping on the couch so I could watch Cheers).
View all posts by megan →
This entry was posted in drama, toddler injury and tagged bathtime, drama, freshman year, hilarity, naked running, roller blades. Bookmark the permalink.