Summer School (Who says you don’t learn during the summer?)

Summer to me is endless hours in an icy pool under the burning sun with either me or my brother yelling, “STOP MAKING WAVES!” (and consequently either my brother or me making waves), burning my feet on the concrete searching for a scrap of shade, and to end the day, the smell of marshmallows roasting over our fire pit with chlorine lingering in my damp hair. I have wanted a fire pit since moving away fifteen summers ago (wait, fifteen??), and because of a trip to the local hardware store to grab a bag of potting soil, and a rogue bronze fire pit marked down ridiculously, I now own one!

So of course we had to put it to use that first night, which meant I needed to build it first.

After a quick call to my mom (for years she and I worked at my grandparents’ hardware store-she ran it, I tried to do everything else) to remember which side the washers go on, it was assembled! Then came the fire making part. My parents’ fire pit is awesome-it’s in the ground, covered in lava rock, and you use a key to turn on the gas. My fire pit is only a vessel-the rest was up to me. And because I was a girl scout for many years, I can build an amazing looking fire structure. However, I have learned that I am terrible at getting firewood to light. Awful. Horrendous. Especially when I get my husband to help. Then it is like the firewood actually gets colder, and lets off the absence of heat. So we did what anyone else would do in this situation-we blamed the wood. But because we already had our three year old set on the idea of roasting marshmallows, there was no backing out-my husband went on his way to go get new firewood, and I got the job of stalling the three year old.

I decided what better way to vamp, than to make the marshmallow toasting skewers (my family’s time honored way was using wire hangers) and get the s’mores fixings ready. Luke was thrilled when I pulled out the graham crackers, and giant marshmallows (he’s far more familiar with the mini marshmallows for his cocoa), and since we didn’t have the  traditional chocolate rectangles, I had to pull out a dark cocoa baking bar to use. I gave my son the job of setting up the cocoa pieces on top of each cracker while I rummaged through the garage for three hangers.

My husband had returned, so he reformed the fire structure and I grabbed both the goodies and Luke to roast his first marshmallow, but something was amiss…I had set out just enough big cocoa chunks for the crackers, but there weren’t as many extra pieces in the foil as I remembered. As I looked at my three year old closely, I had to ask, “Did you eat any of the chocolate?” He smiled, looked directly at me and answered, “no?” He stuck to his story for about three seconds as my eyes danced over the chocolate flecks on his lips and chin, and had to respond truthfully, “I mean, yes. But can I still make a what-do-you-call-it?” 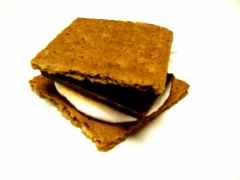 We never actually got the firewood to light, so we roasted marshmallows over the lit firestarting fatwood and kindling. I learned my son is the burn-it-’til-it’s-black type of marshmallow roaster, and prefers the marshmallow straight. I learned that my husband and I need to beg some scouts to teach us how to get the actual firewood to be on fire in our fire pit. And I learned that my new favorite summer activity is watching my son sitting in his new adirondack chair with his molded wire hanger roaster while his own marshmallow burns black. Oh, and the next project on my project list, turn my wood burning fire pit into a gas fire pit (thank you Pinterest.) Hello summer!

**I know it’s not technically summer yet, but it’s been pretty warm these last few weeks and I’m still out on extended maternity leave (so it feels like summer to this teacher).

I'm a wife, mom and kindergarten teacher . A daughter and sister and granddaughter. A friend, a confidante...(I used to watch Golden Girls with my Nana all the time when I was little). And it's so nice to walk into a place where everyone knows your name (and I used to pretend I was sleeping on the couch so I could watch Cheers).
View all posts by megan →
This entry was posted in childhood memories, family time, food and tagged brother, fire pit, memories, pool, roasting marshmallows, s'mores, summer, swimming. Bookmark the permalink.